The Berliner Philharmoniker, the Digital Concert Hall and EDIUS

The Berliner Philharmoniker is one of the most prestigious and famous orchestras worldwide. And offering about 40 concert programs and more than 130 concerts per year the orchestra is also extremely productive. This requires the media team of the Berliner Philharmoniker to be as effective as possible in production und postproduction as the concerts are being streamed live and then made available to the subscribers of the Digital Concert Hall in just a few days later. For many years, the Berlin experts fully and successfully rely on EDIUS while streaming, editing and during the postproduction process.

The history of the Berliner Philharmoniker reaches back until 1882 and the names of the conductors and solo artists are legendary. In 2006 the Berliner Philharmoniker took the decision to undertake a visionary step into the future. The ensemble decided to produce their concerts independently in the highest possible audio and video quality and to distribute the content via internet. 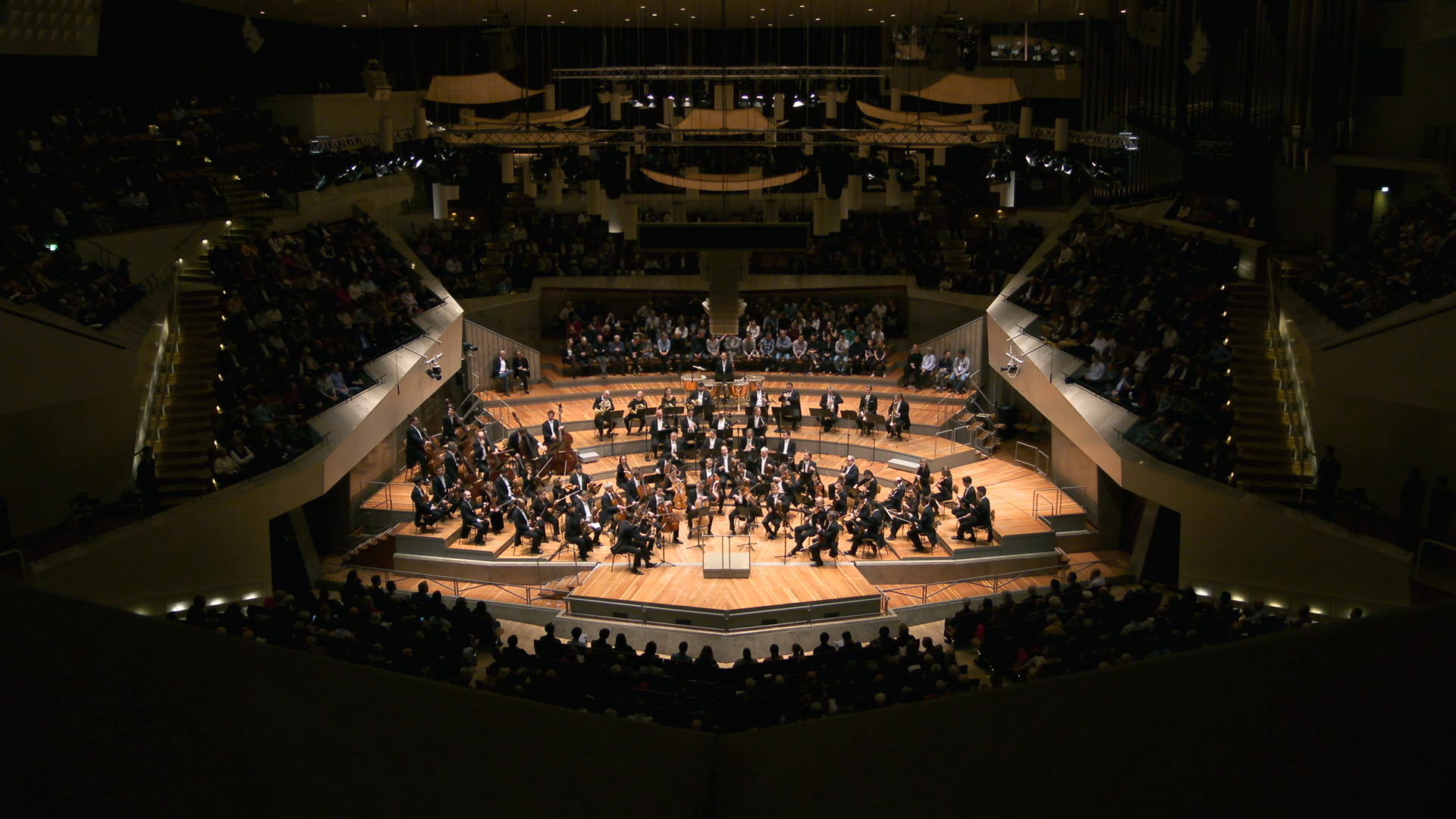 Eight stationary cameras in the concert hall of the Berliner Philharmonie

The concert hall of the Berlin Philharmonic was then equipped with eight stationary broadcast cameras. A live studio was installed also fulfilling the most advanced broadcast standards. And the development of an app was initiated serving a large variety of different soft and hardware platforms.

The offering of the “Digital Concert Hall” provides music lovers all over the world with the opportunity to enjoy concerts and documentations of the Berliner Philharmoniker on PCs as well as tablets, Smart-TVs as well as via Apple-TV and Amazon Fire-TV and even selected movie cinemas for special occasions.

The success of the “Digital Concert Hall” allows the Berliner Philharmoniker to generate continuously growing revenues. And this despite the trend of otherwise declining sales industry-wide in the worldwide market of traditional sound carriers.

“2008 the German Newspaper ‘Die Welt’ opened on page one with the headline ‘The Berliner Philharmoniker play for 10 Euros on the internet’”, remembers Christoph Franke, who was involved as sound director and creative producer form early on in planning and accompanying the development of the “Digital Concert Hall”. 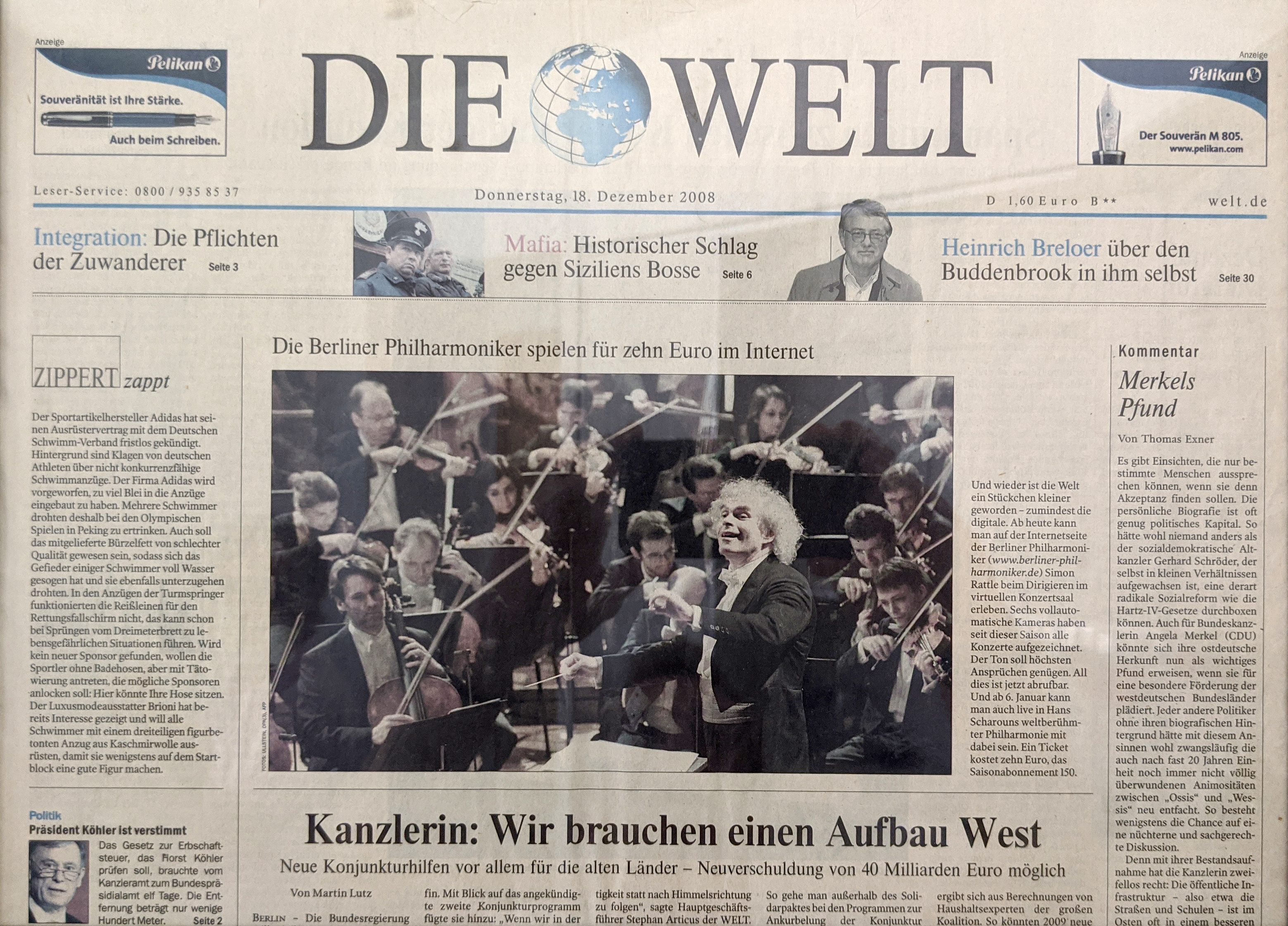 Headline on page one: “The Berliner Philharmoniker play for 10 Euros on the internet”

Sponsored by the Deutsche Bank and broadcast suppliers like Sony and later Panasonic the Berliner Philharmoniker are equipped with camera and studio gear at the highest professional level which is continuously being updated. 2008 Christoph Franke and his team started the regular production workflow with Sony HD cameras as XDCAM 422. About two years ago the cameras, now supplied from Panasonic, as well as the live studio and postproduction studio were upgraded to 4K/UHD. The video signal of the eight stationary 4K-cameras is each being distributed by SDI-quadlink to the live studio and from there as AVC Ultra to the server room. Each camera signal is being recorded as AVC Ultra with a data rate of 800 Mbit/s.

EDIUS is an integral part of the Philharmonic’s workflow in multiple ways. “While streaming live we use EDIUS in combination with VisTitle, to playout titles and subtitles. The performance of EDIUS is a perfect partner to the multitude of VisTitle’s design options.”

Complex corporate design rules need to be followed. This also means that different fonts as well as font sizes need to be combined in one line. “VisTitle offers these options and the handling of SRT-files for subtitling also works perfectly” says Christoph Franke. 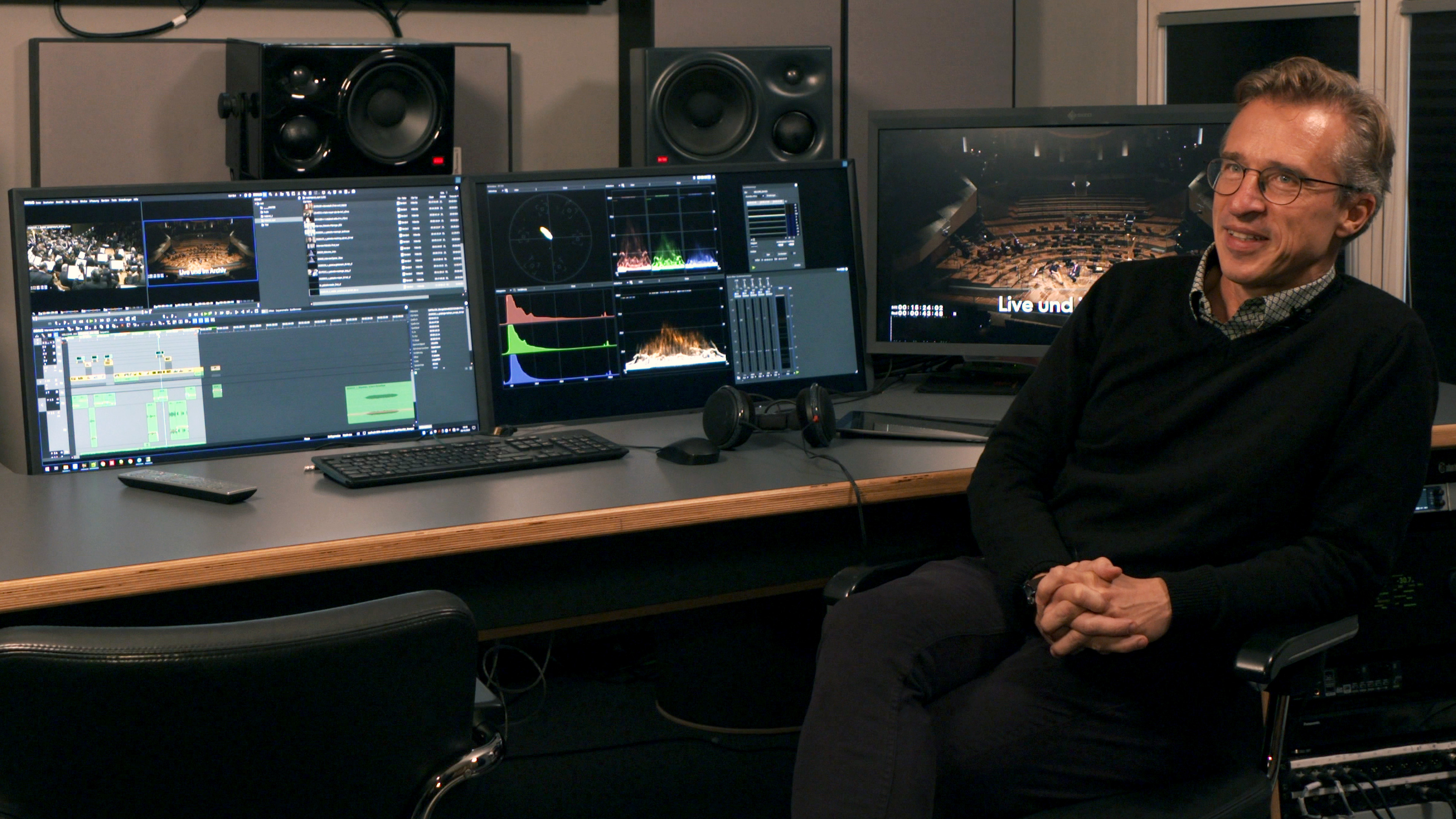 Once the concert is over the essential work for the postproduction team begins. The concert recording, which will soon be available in the media center of the Berliner Philharmoniker for all subscribers, is expected to meet the highest quality standards.

In a first step the live mixed audio stereo track is being exported with a compressed video signal. During the audio edit the video picture serves only to check that both are in sync.

Even before the actual concert the media team regularly records both rehearsals. “From time to time musicians ask us to use a certain part from the rehearsal for the master version” explains Christoph Franke. “Depending on the length of the sequence to be replaced we either exchange only the audio part or audio and video both together.” 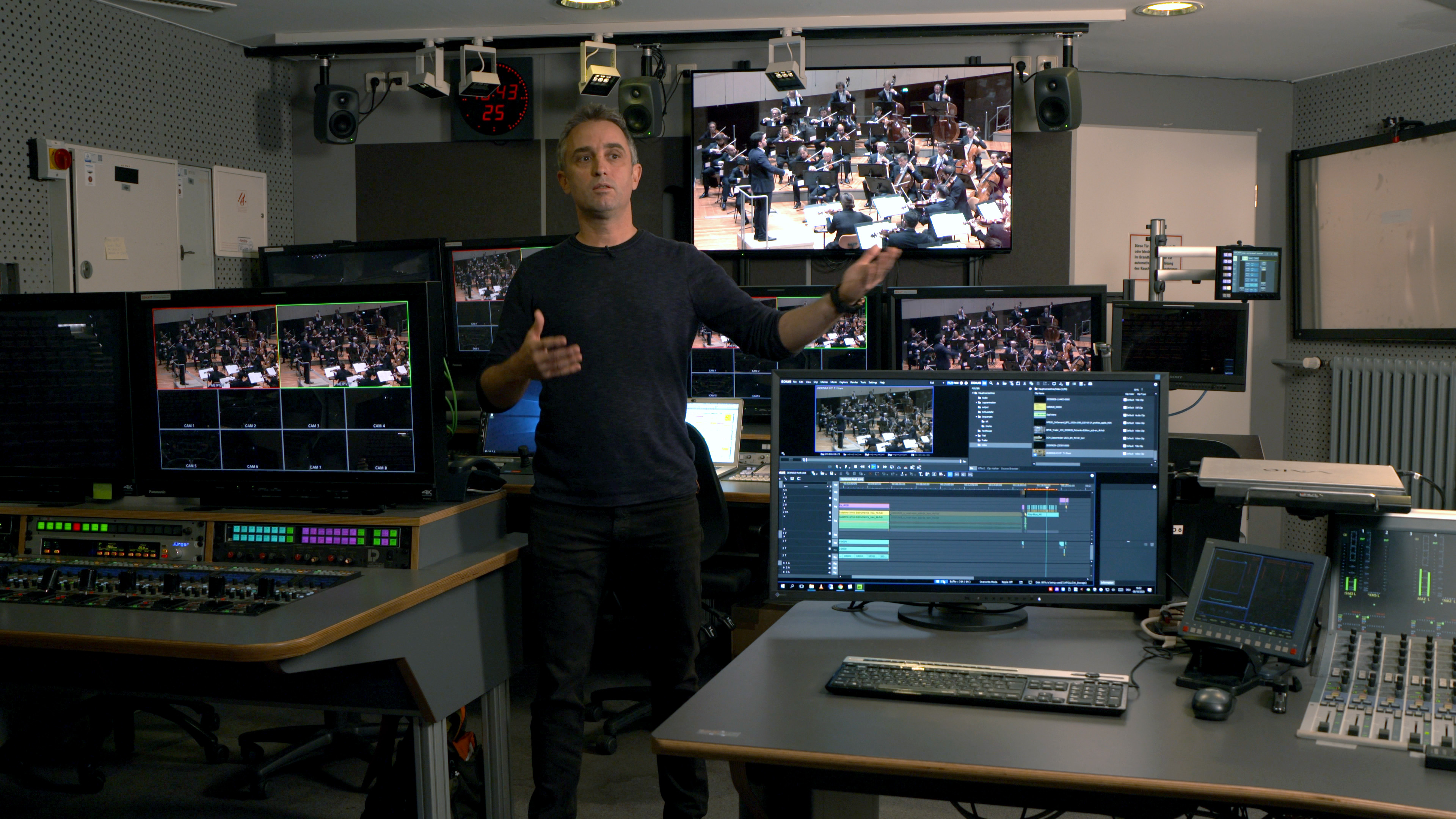 When checking the recording the team might detect some disturbing background noise like somebody in the audience coughing. “We can then very much reduce this noise applying a Spectral Cleaning.”

Editing and optimizing the audio is being done with a specialized audio solution. Once the audio is finalized all further editing is done with EDIUS. The original audio track is being exchanged in EDIUS by the optimized audio version.

The script to the concert

Each concert is being thoroughly planned. The video directors study the score and mark the exact timing for switching cameras. The settings of the eight cameras – a nineth camera on a tripod in the hall can be added when needed – are all precisely defined by preset numbers. 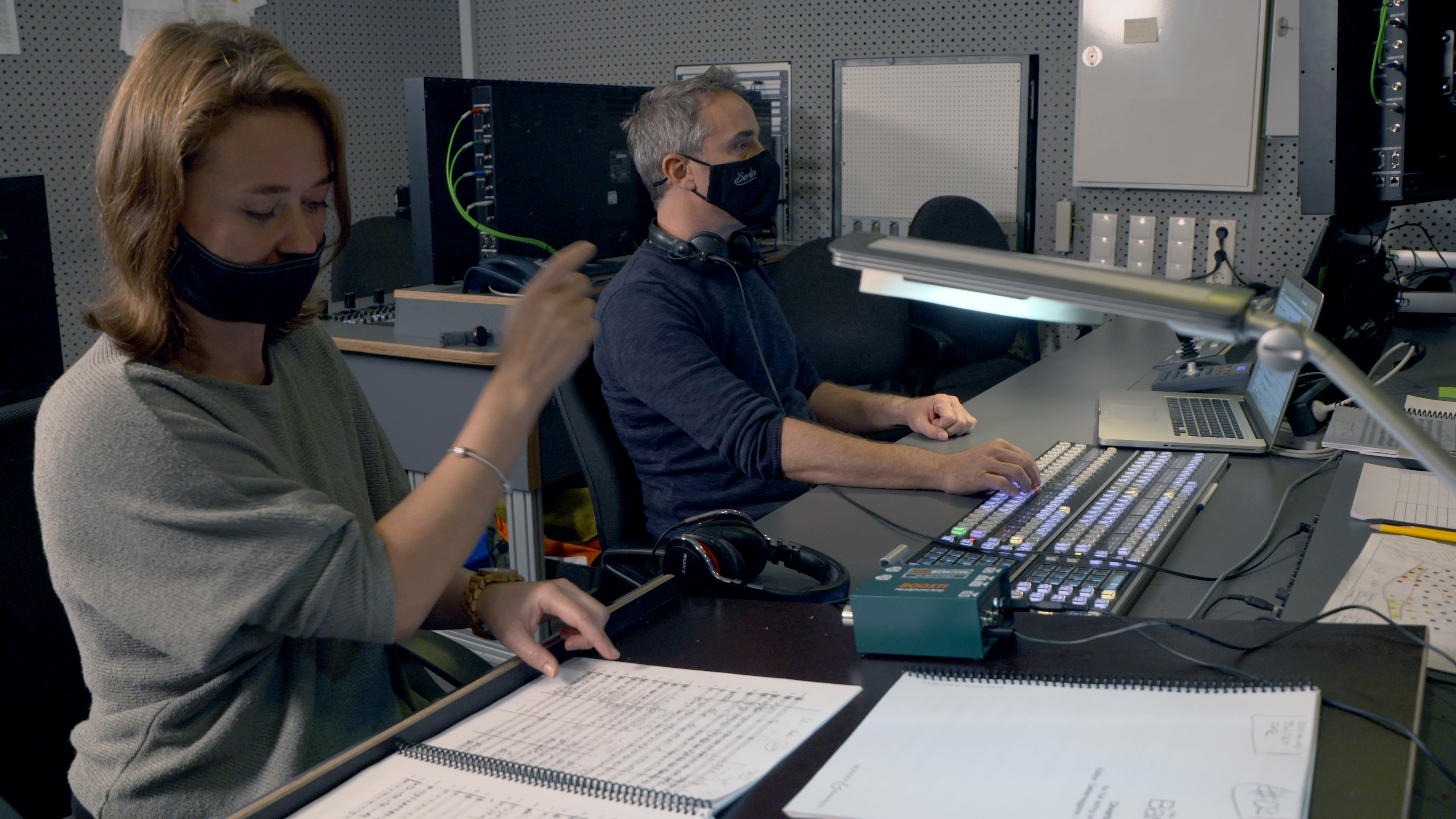 The score is the script for switching cameras

“Because of the precise script and the experienced team in the live studio we need to do only minor changes during the later editing process” explains Christoph Franke.” But of course, it does happen from time to time that a musician is not yet playing when the camera was switched, or the focus might not be perfect.”

In EDIUS all tracks are available of all cameras that were involved in the recording. “The multi cam function allows us to time the switching differently when needed or even choose another camera as source.”

Thanks to EDIUS playing back the up to nine video tracks simultaneously with a data rate of 800 Mbit/s per track is no problem and possible at any time as the playback resolution can be lowered if needed. “This is an important feature for us and a great advantage. Whether the timing works right especially for music can only be judged if you can play back your project in real time” says Franke. 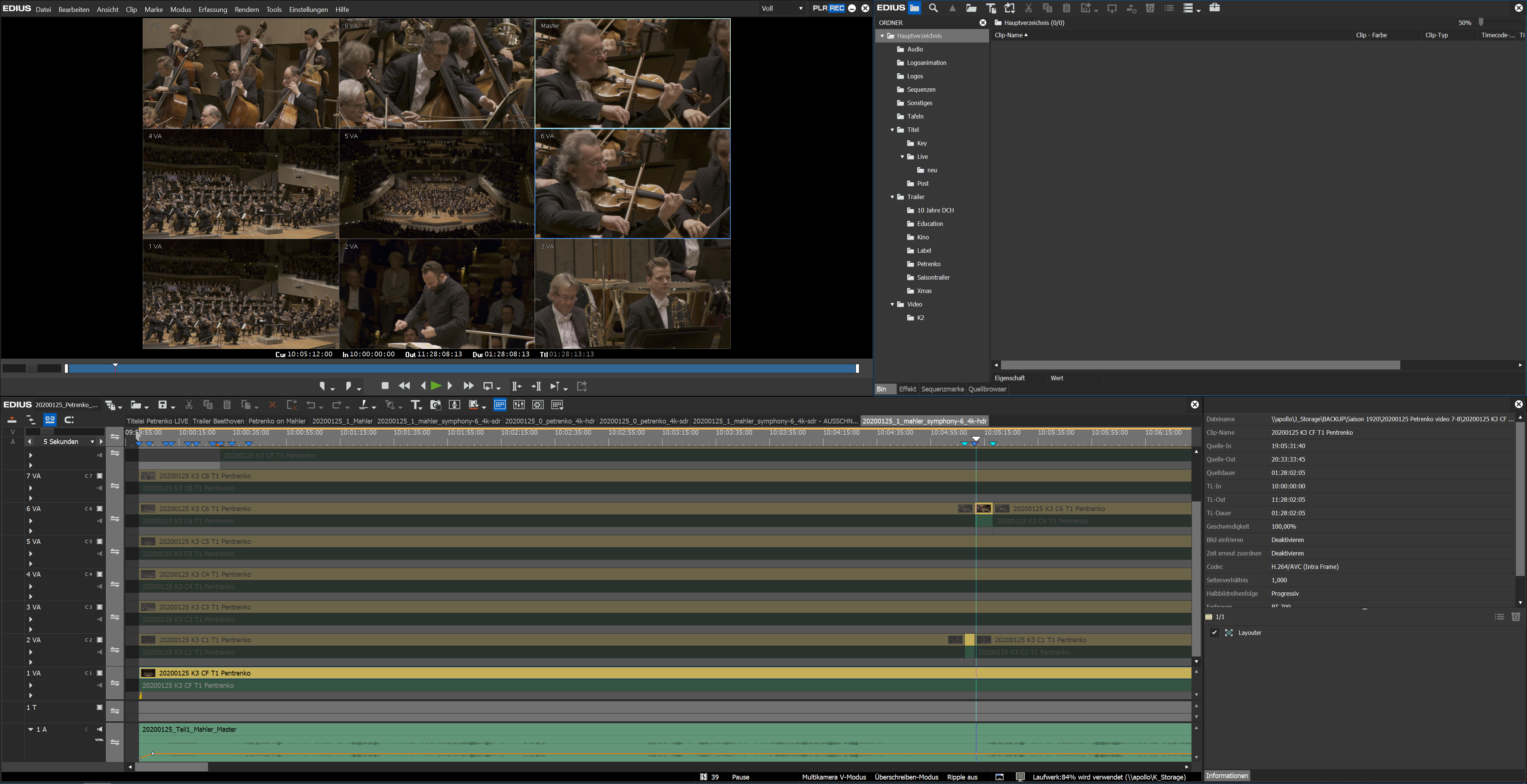 EDIUS tools like the Layouter and the Primary Color Correction allow fast adjustments of framings, exposure settings and the color balance can just as easy and intuitively be corrected and adapted.

The EDIUS postproduction workflow is streamlined to maintain an optimal and therefore futureproof level of quality throughout the complete process of acquisition, recording and editing up to the final master in the shortest achievable time. Christoph Franke: “To maintain the best quality we export the master as AVC-Ultra 800 Mbit/s which is also our acquisition format. Thanks to the Smart-Render-Function EDIUS only needs to render those short moments, where we have applied changes to the picture. These are about only five minutes of a 2 ½ hours long concert program. EDIUS can therefore export the final master file as 4K HDR HLG (800 Mbit/s video data rate in 50p and 96 KHz 24-bit audio) in a fraction of the time that would otherwise be required.

Christoph Franke: “We are lucky that we have found with EDIUS not only an extremely powerful and stable NLE. We also benefit from a very capable support hotline which is in direct contact and exchange with the EDIUS development team in Kobe Japan.”

Such an enhancement was the modification of the desired AVC-Ultra export function, which originally splits the export file into numerous files of 4 GB size each – fully compliant with the P2 specification by Panasonic. “For our workflow needing to export a master file up to 800 GB in size this P2 required splitting made no sense” remembers Franke. “We therefore asked the EDIUS support if they could help us”.

The support and development team were able to provide the desired solution. Since EDIUS version 9.3 all EDIUS 9 Workgroup users benefit from the extended functionality. XAVC Intra 4K and AVC Ultra 4K can now be exported within the MXF container without a size limitation as one file. The AVC Ultra MXF exporter was enhanced supporting HDR metadata and additional audio settings. Christoph Franke: “With this another important wish could be fulfilled because we produce 4K HDR with Hybrid Log Gamma“.

Remote rendering by the XRE-Transcoder Server

Additional to the concert master the Berlin media team also produces trailers for the social media channels of the Philharmonic. “And we use EDIUS to edit and subtitle the interviews with artists which are being shown during the intermission of the live concert streams”. 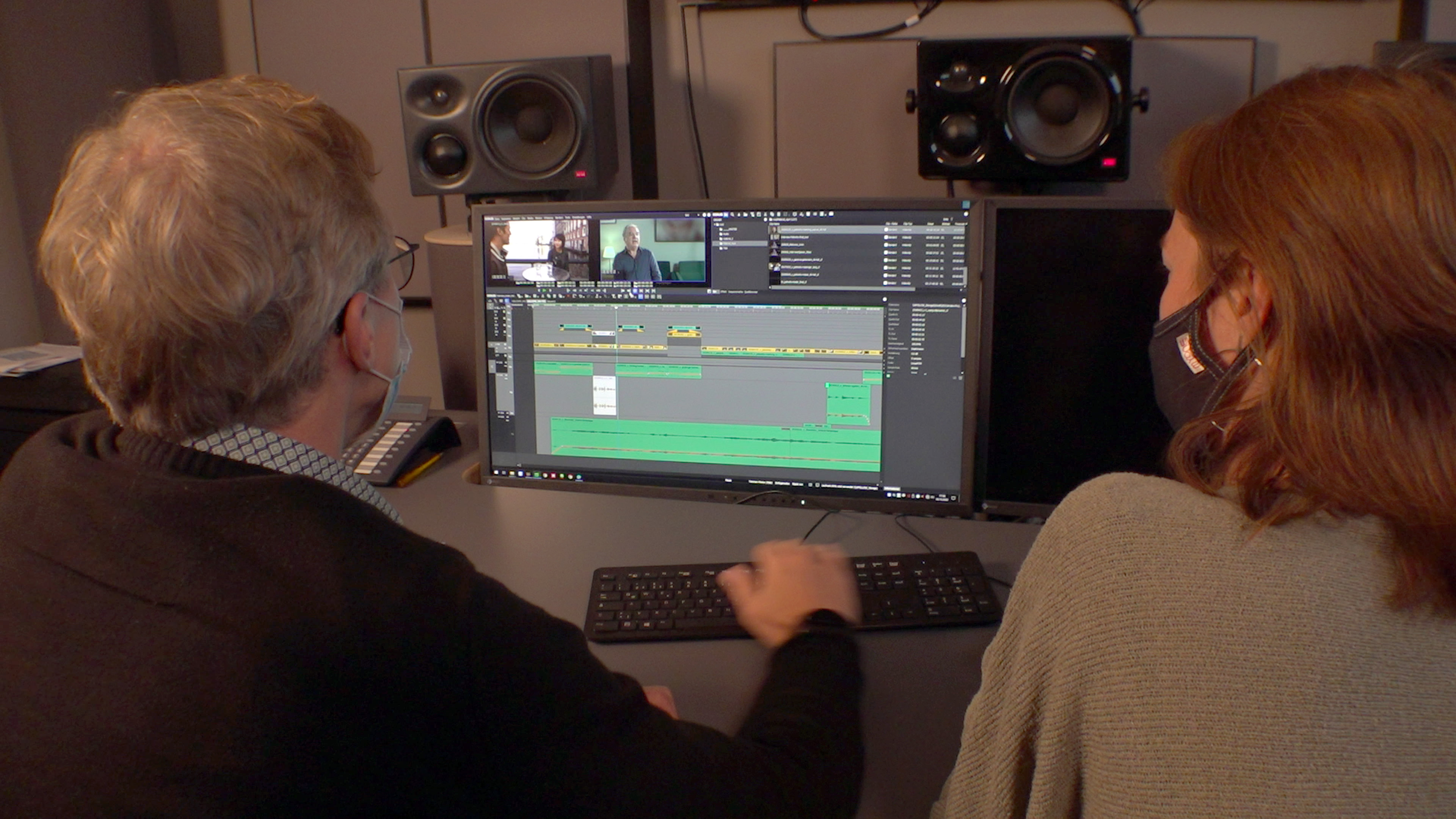 Also trailers, interviews and social media content are being produced with EDIUS

A lot of content is being produced and as many projects need to be edited and exported as master files. To reduce render times exporting files even further the EDIUS workflow was complemented by an XRE-Transcoder Server. This boosted productivity to the next level because the processing and rendering is now being performed completely by the XRE-Transcoder Server. Franke: “Our EDIUS seats only need to initiate the process and are then available for further editing tasks with all of their performance.”

By the time the management team of the Berliner Philharmoniker was developing the concept of the “Digital Concert Hall” about 15 years ago, the mangers clearly did not have in mind how helpful this digital concert hall might once become facing a global pandemic. With this the Berliner Philharmoniker succeeded in overcoming restrictions of the Corona crisis, keeping and even intensifying the contact and digital link to their audience.

Christoph Franke: “Within the last 15 years we have been able to gather a steady number of subscribers counting more than 70.000 customers. Among those are many private music lovers as well as many institutions like music academies and colleges worldwide. For this we are very thankful.

One important factor in this success is the reliability and performance of our mastering and creative solutions with EDIUS being an integral part from the very start.

All images origin from an EDIUS-user-video report produced by magic multi media on behalf of the release of EDIUS X. Here you will soon find the video about the work of the Berliner Philharmoniker media team with additional information and insights.